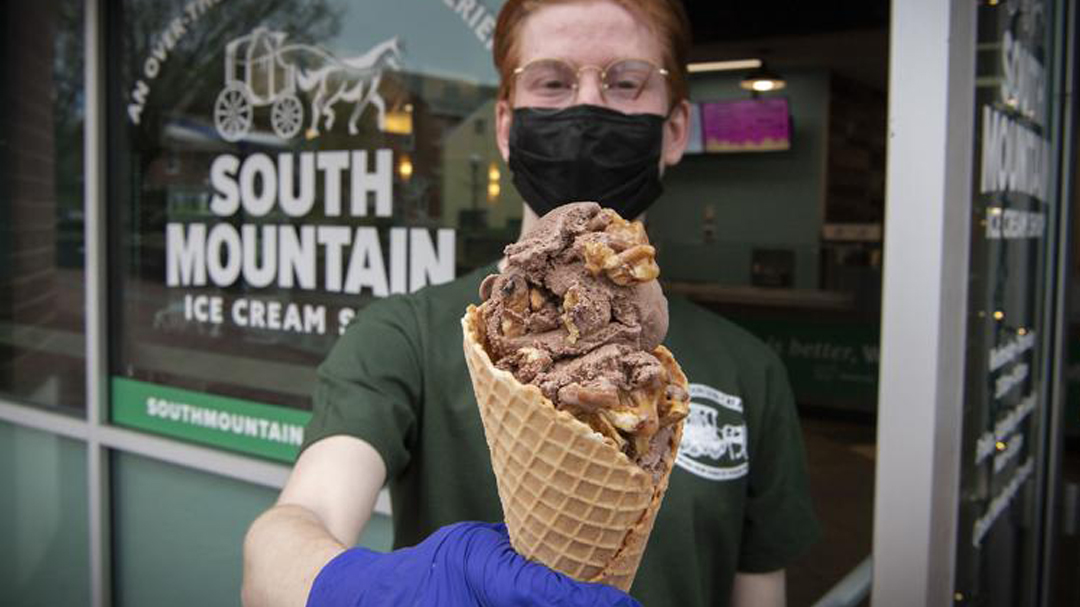 The ice cream shop is described as an “over-the-top” ice cream experience, featuring milkshakes, both hand-scooped and soft-serve ice cream plus a variety of specialty sundaes. One such sundae is called “Breakfast Trash” and includes vanilla ice cream and cereals like Cap’n Crunch, Frosted Flakes and Fruit Loops.

“You can still get the same favorites that we’ve always carried, but we’re just adding more … and we’re trying to make that ice cream experience something to really come down for,” said Jake Cline, general manager of Hometown Harvest Kitchen, who now manages the company’s home deliveries.

Hometown Harvest Kitchen had an ice cream counter in the past, but with fewer options. South Mountain also serves its ice cream on the farm in Middletown and at Trickling Springs Creamery in Chambersburg, Pennsylvania.

“So we offered ice cream before, but doing this rebranding we’re really doubling down on the ice cream experience,” said Cline. “So we’re offering a lot more than we ever did before.”

The shop will celebrate a formal grand opening on April 17, which coincides with the 20th anniversary of South Mountain Creamery. They will be giving out free samples of the new soft-serve ice cream from 2 to 4 p.m.

Hometown Harvest Kitchen, the farm-to-table restaurant, has been closed to the public since December and has since been used exclusively as a commercial kitchen for SMC’s home delivery meals. Cline said the decision to close was a natural pivot considering COVID-19 cases were rising and regulations were still strict.

“We just kind of doubled down and focused a lot of our efforts on that meal-delivery service, and that’s what allowed us to get through some of the really slow, harder times,” he said.

The restaurant has been renamed South Mountain Creamery Kitchen, but plans for reopening a full-service restaurant have not yet been finalized. For now, they are only using some of the space for the ice cream shop and the rest for the meal-delivery service.

Home-delivery meals were already a large part of South Mountain’s business before the pandemic, but Cline said demand drastically increased during the COVID-19 pandemic.

The opening of the ice cream shop coincides with the beginning of spring and warmer weather. Seating will be available both indoors and outdoors.

“We are definitely hoping that everyone can come and see what we’re all about now with our rebranding,” Cline said.